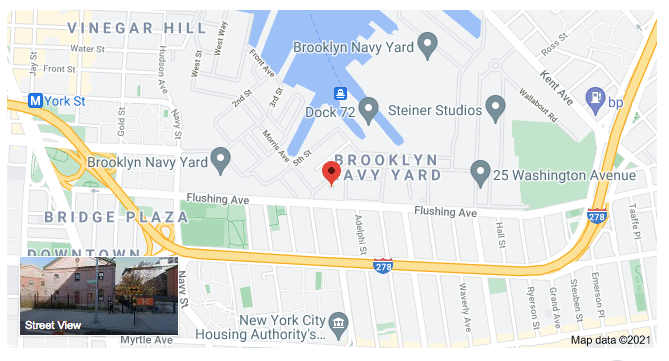 Tracy Wuischpard and Bruce Tovsky have been painting, making music and experimental sound, and holding salons at the Brooklyn Navy Yard for over 15 years at Studio 106 in Building 30.

On display until the end of 2021, Elegy is an installation piece designed by Wuischpard for the atrium of the visitor's center in Building 92 at the Brooklyn Navy Yard. With the ever mounting numbers of pandemic deaths, this work makes time and space for the community to honor and grieve, to process, and to heal. Put on your telephone headset and then click here for a 6 minute, 360 degree sound experience produced by Tovsky

Painting has remained a focus for both Wuischpard and Tovsky. They have shown their work at numerous Open House New York events in their studio at Building 30 at the Brooklyn Navy Yard. Wuischpard had a one man show of her paintings, "Size Matters" in Domenica in 2014. Tovsky is currently working on a suite of paintings depicting both realized and unrealized performance and installation work over his nearly 50 year career.

Tovsky's multimedia background has lead him to do a series of large format prints from both video and audio sources. His works using audio files are in numerous collections.

Tovsky has had a long career in multimedia art dating back to the 1970's. His works which include film, video, and experimental audio performance have been performed and shown throughout the world.

Tracy Wuischpard received a BFA at Carnegie Mellon University in painting and filmmaking with an emphasis on conceptual art. She has since worked as an editor, writer, and director. She continues to paint and is pleased to have been a grant recipient in 2020 chosen by the Brooklyn Navy Yard Public Art Initiative to do an installation piece in Building 92 which will be on view until the end of 2021.

Bruce Tovsky is a printer, painter, experimental filmmaker, experimental musician, and editor. He took a masters in multimedia at Rutgers University. In addition he has worked as a producer for many bands in the 1980's downtown NYC scene including Liquid Liquid and Dog Eat Dog.

Studio 106 is an ongoing experimental audio and video performance salon. Artists are invited to perform live in front of an audience and then discuss their work and process. International artists as well as artists from the New York area have performed and discussed their work here for over 15 years.